Five Dock was named after five small inlets on the Parramatta River.
Surgeon John Harris was granted the area but it was not settled until 1836 when Samuel Lyons bought it and subdivided.

Drummoyne was named in the 1840s after an area in Scotland by William Wright who built a house there.

Both are presently suburbs of the City of Canada Bay. 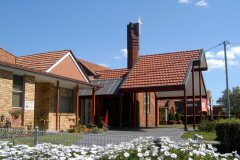 The first church in the area was the Anglican Church of St Albans.

Wesleyan services commenced at Five Dock in 1862 in the home of Samuel Lyons.

The first Methodist Church opened in Lyons Road in 1866, however attendances fluctuated and the site was sold in 1880. The foundation stone of the Lyons Road building is set in the present Uniting Church and the original Bible is also displayed there.

A second church site was purchased in Garfield Street in 1891 and opened in 1898.
A church hall was added in 1922. The foundation stone for an enlarged church was laid in 1939 and includes stone from John Wesley's church in London brought back to Australia by the Rev. Alan Walker. This stone is now displayed in the foyer.

The church joined the Uniting Church in 1977 and a major refurbishment was completed in 2004.

150th Anniversary celebrations were held in August 2014. View or download a copy of the 150th History Booklet here 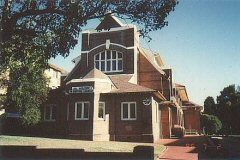 The first Methodist meetings were held in Drummoyne in 1886 and a church opened in 1888 on what is now Victoria Road. The present church in College Street was opened in 1910 and its pipe organ installed in 1928. The church was remodelled in the 1940s. A parsonage was purchased in 1960.

The congregations decided to join with Five Dock in 1998 but a separate Rotuman congregation meets regularly at Drummoyne.

The church maintains its own historical collection and always welcomes new material.